ANNANDALE, NJ., November 5, 2018 – In July of 2018, the Wayne Police Athletic League (Wayne PAL) went online with their own 298.8 kW roof-mounted solar array.  Just in time for the height of the summer sun, the busy facility ran their operation on clean solar energy and they saved money while they were at it too.

Wayne PAL has been an institution in Wayne, New Jersey since its inception in 1956.  Wayne PAL was founded as a non-profit youth organization with the goal of providing sports programs for the youth.  These programs served as a positive outlet and were preventative rather than corrective in nature.

Today, the organization is sanctioned by the police department but run by passionate civilians.  Wayne PAL is still a sports organization and one of the largest in the area.  It offers soccer, football, basketball, lacrosse, Tae Kwon Do, cheerleading, and more.  The facilities are so well equipped they can even produce top athletes like NFL tight end, Greg Olsen.  Wayne PAL is not just a sports organization but also a community center, daycare center, and disaster relief facility.

With all that activity, Wayne PAL’s price to pay came in the form of an annual six-figure electric bill.  As a non-profit, this was a concern for their executive director Steve Schiffman.   Steve has been involved with the organization since he started volunteering in 1978, and is the perfect guy for the organization.  He is simultaneously both a business person and a coach.  He doesn’t see Wayne PAL getting any smaller, so the issue of the electric expense became one of his priorities.

“Because of the SRECs and how much we were previously spending on electricity, this project can make sense.”

The difficulty in solar for non-profits is that so much of solar economics depend on the ability to take advantage of the tax credit.  These types of solar projects are forced to forgo an incentive that can return 30% of the project cost to the investor and rely strictly on the energy savings from net-metering and the selling of SRECs.   Despite Wayne PAL being unable to take the federal tax credit (ITC) or solar deprecation (MACRS), they are still able to be in a position of positive cash flow with a break-even of about 5 years.  “What does it for this project is the SRECs,” said Steve.  “Because of the SRECs and how much we were previously spending on electricity, this project can make sense.” 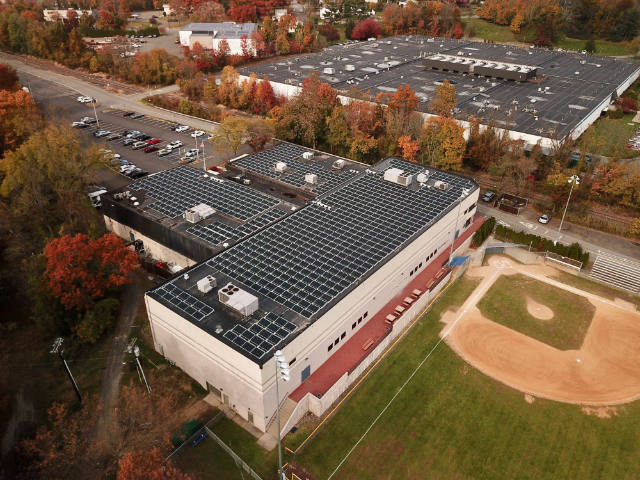 For Wayne PAL, working with Green Power Energy on the solar project was easy because the estimated system production and the financial situation for a non-profit without tax liability were made clear from the start. The solar array is comprised of 830 SunPower solar panels located on three roofs and mounted on low profile solar racks facing south.  The system is expected to produce 370,000 kWhrs of electricity annually which will offset over half of the facility’s electric costs and save them over $100,000 per year with electric savings and SREC income.

The system also produces the equivalent of eliminating 223,000 pounds of coal from burning per year; a fact not lost on Steve or the management at Wayne PAL. Steve’s focus must be about saving the organization money where he can, but the social aspect of going solar also played into his decision. “Going green is something I always wanted to do, but for an organization like ours, you simply can’t do it if it doesn’t make financial sense.  Luckily now we are in a situation where we can go green and save money at the same time.”

To find out more about Wayne PAL and to sign up for athletic programs, you can visit their website at https://www.waynepal.org/.

Green Power Energy is a New Jersey solar energy voted as the #1 solar company in New Jersey by Energysage.com.  Located in Annandale, NJ and founded in 2009, Green Power Energy has experience in residential, commercial, and nonprofit solar installations.   To learn more and to sign up to receive an estimate for your property, visit Green Power Energy on their website, https://greenpowerenergy.com/contact/.